From Playing cards to Recipe Cards 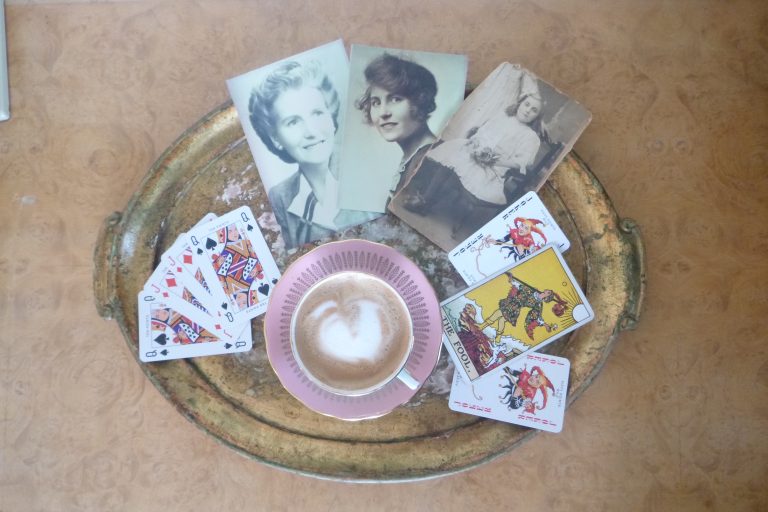 When I cook, I like to think of the character, the nature and qualities of the dish, what it is they would like to say,

what aspect of me they might tap into and help me express. I have such a chatterbox head, so engaging my imagination whilst cooking, holds my attention on the job in hand. Although I’m so food orientated that I’m pretty focused on the rewards and sensory gain, when it comes to cooking. It has been the one place that I have unwittingly practiced mindfulness, felt able to indulge a creative pleasure, could be discerning without judging, but most importantly, express my love of food and those I cook for (including of course, myself).

One of my favourite dishes is Risotto. No idea why it got into my head that it was hard to cook but there it was; so finding out how simple it is, was almost a let down for this adventurous cook. However, I realised what is hard is the amount of patience involved: the standing still, doing one thing, ideally quite slowly – for this somewhat hyperactive cook… So when it came to characterising the dish to myself and in class, I came up with the blond diva: who needs constant stirring of attention, being soothingly spoken to but not overwhelmed with too much information at once (pour liquid in slowly, and you can drift off as long as your gaze remains lovingly with her) – remind her how gorgeous she is and how much everyone will love her once she arrives – late – on stage…. I was delighted and surprised to find how easily my students tapped into the idea and became quite animated, some of the less inhibited really playing along and falling in love with her, sending her to their table with wanton glamour. The results were delicious and quickly became a course favourite. So, the madness in the method worked.

My first course was called ‘Learn to Love Cooking’, as when we take pleasure in the process, charmed to live in a world that has garlic, beetroot, thyme, vanilla… that’s when we add the spice fun that tastes better than good. Encouraging students, as I did myself, to audibly appreciate how good the ingredients look as you chop them, how their aroma and colours light up as you introduce heat and oil… After all, English squirming aside, we all glow a little brighter under a compliment. Cooking with playful pleasure, allowing our senses, our in-tuition to take the lead, rather than our head dutifully following the recipe book, tastes of creative confidence. As the exquisite cook Tita in Like Water for Chocolate (if you’ve not seen this film, do, it’s a deliciously mad Mexican gem) reveals, the emotion we cook with is conjured in the eating…. As the various house mates who got to try my students’ sumptuous risotto will stand witness.

The notion of using playing cards as the stage for these recipe characters to perform on, came from linking two key sources of inspiration for me. Firstly, my dear Great Grandmother (Nana), with whom I was privileged to while away many an hour over “milk with a dash” and chatter about birds, cakes, wars, hats, books…. playing Bezique or her version of rummy. As I loved her, I loved playing cards and drinking sweet milky coffee. From her warm, wise and wily words, I learned about life, love and laughter.

My second source of inspiration was Carl Jung, in particular his notion of the collective unconscious, of synchronicity and how this connected with his understanding of the Tarot. His ideas offered a deep ancestral reservoir of alliance, of “meaningful coincidence” where time and space melt, allowing our unconscious mind, our inner-tutor to hold sway. His broad, experiential theological study gave me the bridge between art, science and spirituality, that this 80’s urban teenager needed. But what I owe most to Jung is how he demystified, validated and revealed my secret indulgence – reading the Tarot. Thinking about the cards in terms of ancient archetypes that could tap into our shared unconscious, connected me to a timeless, intimate human experience and appealed to my romantic leaning.

Each card tells a story from inside out, from past to present and onwards. The excitement and reassurance of interconnection. The joker in cards as the Fool in the tarot, always raising an alternative grin that shakes the play into a new direction. I’d always wondered why the Queen of Spades was of such high value in so many games, so when I found that Spades were actually the suit of Swords in the Tarot, it all made sense, Swords indicating aristocracy. In my recipe cards, Spades are spades, digging the land and honouring the strength of my Arian peasant roots – see Ace of Spades as my first recipe blog waiting to be written…

The ingredients for a creative recipe book as a set of playing cards, based around intuitive cooking, came then from these various roots learning, ideas, people, stories and of course food – all the things that make my life what it is. Since we are indeed, what we eat.